Install the scribefire plugin from here

Sitting on another one of those interminable conference calls that seem to punctuate my working hours, I happened to chat with a colleague who wanted a clarification on something I said. Well, mac laptops (the thing I was talking about) aside, he pointed me to his band's site (www.sonicflare.in) and their latest release Hurt.
Go have a listen and read about the reason behind Hurt.

I still have goosebumps.

Ping!
whoa...more than a yr since the last post.
Wonder how much longer for the next one.

Update on the last six months

Got married.
Moved to a new house.
Was in the US for 2 hectic months. Drove a convertible for the better part of those 2 months.
Went to Mumbai and Pune. Visited Amby Valley.
Attended a Bluetooth UPF (finally!).
For those who missed it, I got married.
Reduced 6 kgs thru exercise and diet (ha!). Gained back 2 kgs god alone knows how.
Came upto this blog update page umpteen times and left without writing anything.
Bought a Nintendo Wii and have reached the pinnacle in Wii Tennis.
Relegated the XBox360 to paperweight.

Will expand on most of the points above in later blogs....but no promises. I think it's better this way to write when I feel like writing rather than a compulsory post every 2 days.

Happens every year.
I think it is a sign of the times that "Restart Blogging" is a New-Year Resolution.
Just one more thing to make me feel guilty. Like answering phone calls on weekends.
I imagine that 500 yrs ago all I would feel guilty about was for not washing up once a week or the fact that I was hiding up a tree in the last epic war* between our nations (read: woe-begone villages).

Today, the make-me-feel-guilty-about list goes something like this:
- Watching more TV
- Reading less books
- Miserable General Knowledge
- Missing the last feature deadline
- Eating out more often than necessary
- Not servicing my bike for the last 1 yr
- Not checking the oil in my car for the past 6 months
- Overspending on audio accessories
- Not maintaining the required share ratio for some torrent dlnds
- Not finding enough things to write about in this list.

Most are irrelevant (On my death-bed, I won't be wishing I had maintained my share-ratio...unless the torrent community had placed a hit on me for that reason) but still manage to cause me worry.

Still, I'm back to writing. One less worry to worry about.

So what causes your worry-warts to break out?

Second weekend in Tokyo. Made plans to go to Seaparadise at Hakkeijima near Yokohama. Was woken up at 5:30am, reached the station at 7am and took the train to Yokohama with 3 colleagues. 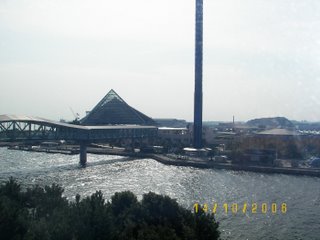 Lots of rides and stuff like that. Was quite intimidated by the Blue Fall when I saw it the first time. 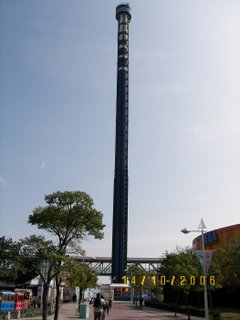 Face thy fear! Sat on it with mixed feelings. The ride up was tension filled with the announcer counting down the seconds before the plunge. The plunge itself was very exhilarating as I kept my eyes open all the time.
In the end, took it twice. Do Fallen Angels feel like this? Is that the reason why they Fall?

Also went on the roller coaster ride twice. Meh...could have been better. 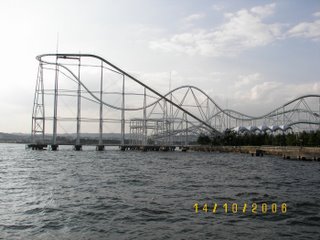 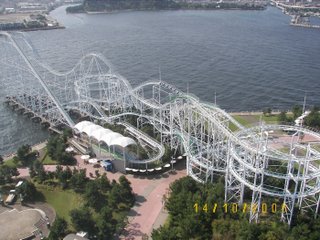 Roamed in the shopping streets of Yokohama in the evening and went to China Town too. Tiring day, but well worth the trip. 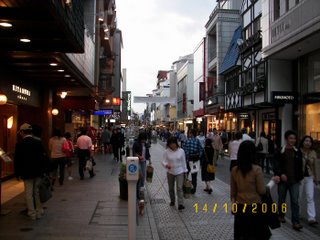 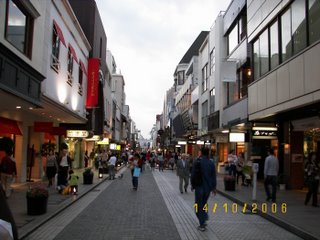 Interesting structures....these Chinese temples. The priests were wily enough to con one of my friends into donating 500 yen(about Rs 200/-). The chap came out wondering out loud if this amount was more than he had put in all his life into temple hundis :) 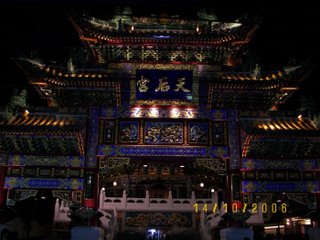 Oh yeah...most of the restaurants here display their menu outside the door and quite a few prepare you for the shock inside too with wax replicas of their food. 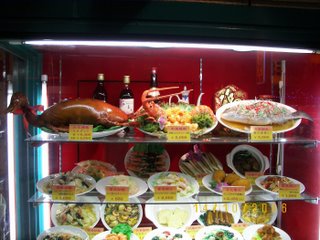 The Tokyo Chronicles: Money Walk or "One For The Money..."

What do you do in a new city if you have 3 holidays back-to-back and don't know a soul? Why, you walk. You get your ass off the hotel and head out in no particular direction. The trick here (especialy if you are in a city where you are a certified illiterate) is to look back at the road you came by and picture how it would look in the dark. Note the signsboards and the shops in the corners. Of course, it helps if your hotel has a nameplate right on top of the 18th floor, but still, you never lose the basics.
Walked left from the hotel, down a bridge over the metro rail and again turned left. Walked a kilometer and reached Meguro station. So far so good. Saw a bunch of hotels nearby including 2 or 3 Indian food joints. Hmm...info stored for later.

I had run out of money in the first 3 days itself. Had only converted about 100$ into yen and it was time to withdraw more from a nearby ATM. Nearby? They were EVERYWHERE! I had noticed the ATMS during my previous walks and it was now time to put the info to good use. So I go up to the first ATM I see, check to see if it accepts Amex and slot it in. Around here is where I hit the first roadblock, namely the lack of an English option on the screen. Now, punching randomly on the screen with your ATM card safely ensconced within the machine is not a good idea, right? Right. I decide to take the card out. Which button exactly, again? Err...hmmm. At this point I am conjuring up images of all the ATM screens I have seen and collecting data for a huge leap of faith based on the fact that software engineers everywhere will code in similar fashion. Not quite scientific but it bore me out when I touched the bottom left menu item. The card came right out with a polite voice telling me to "Domm Arigato Gojaimas"...which I learnt later that day meant "Thank you very much".
Onto the next machine. Same problem with the language option which I checked before even taking the card out of my wallet. Ditto with the next 3. Sigh..this was getting to be frustrating. I decide to take the ultimate leap of faith and go over to the counter and ask for help from the attendant. she takes me to the ATM machine, slots the card in, punches the right buttons and up comes the PIN screen. She moves aside and I enter in the PIN. Now its easy sailing because the next screen asks me for the amount to be withdrawn. I enter in a judicious amount and wait to get rich. Well, not today! The machine spits out my card (politely, of course) and murmurs "Domm Ari.." like it means it. The preplexed lady calls for help from her colleagues and they crowd around trying to make sense of the gaijin's gibberish. Long story short, I return to the hotel empty handed and enquire at the front desk about forex. Turns out the ATMs in the shopping centers were meant only for Japanese cards and all foreign cards had to use the Post-Office ATMs to withdraw cash.
Ka-Tching! Next morning 20,000 yen richer and a whole lot wiser.